UpHabit is a personal CRM application that allows users to build and maintain important relationships. 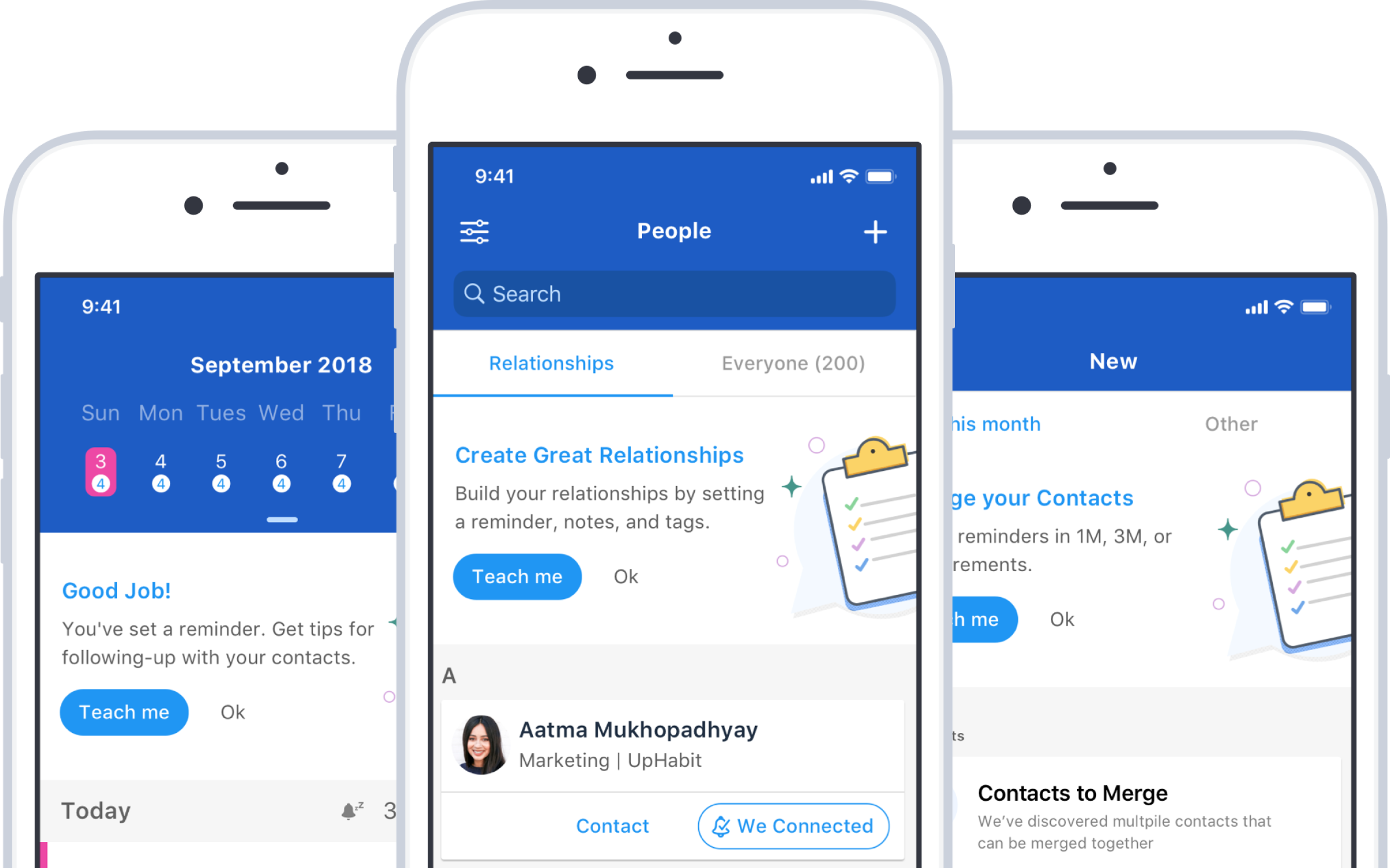 UpHabit is a personal CRM application that allows users to build and maintain important relationships. A user will do so by setting reminders, adding notes, and creating tags to their relationships.

To use UpHabit to its fullest potential, users must be constantly creating reminders, notes, and tags to build their relationships. This ultimately creates daily habits for the user, which leads to them wanting and depending on the app more.

We were seeing an increase in drop-off after users signed up on the app. This ultimately leads to a decrease in subscriptions and sign-ups.

Since users were not following up on the reminders they set, we assumed that we just had to do a quick UI update to help users follow through their reminders. As this was our initial solution, after conducting research there was a bigger problem that came up.

It was apparent from our research that the reason why users were not following up on their reminders was that they didn’t know how to use the app as a whole. Since I was on a time constraint of a month (2 weeks at this point because of user research) I had to quickly pivot another direction and create an MVP.

“Clippy”, a helper dismissible card was created to guide users throughout the app from start to finish.

Prompting users to take the next action helped and reminded them to keep maintaining their relationships. 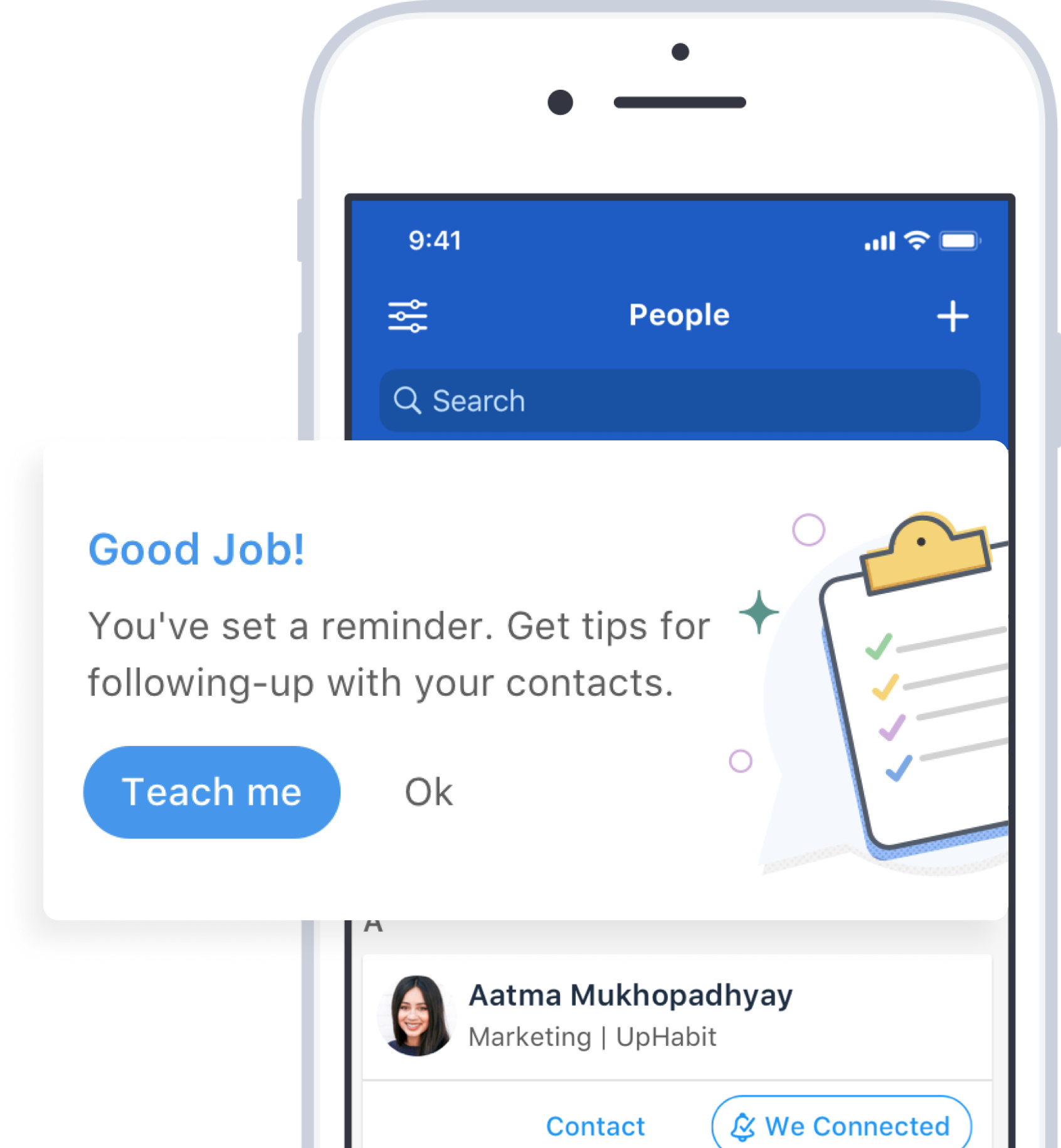 Before getting into the usability test, we created the ideal flow of how a user should go through the app. This would give us an idea if any pain-points are brought up during our usability test. 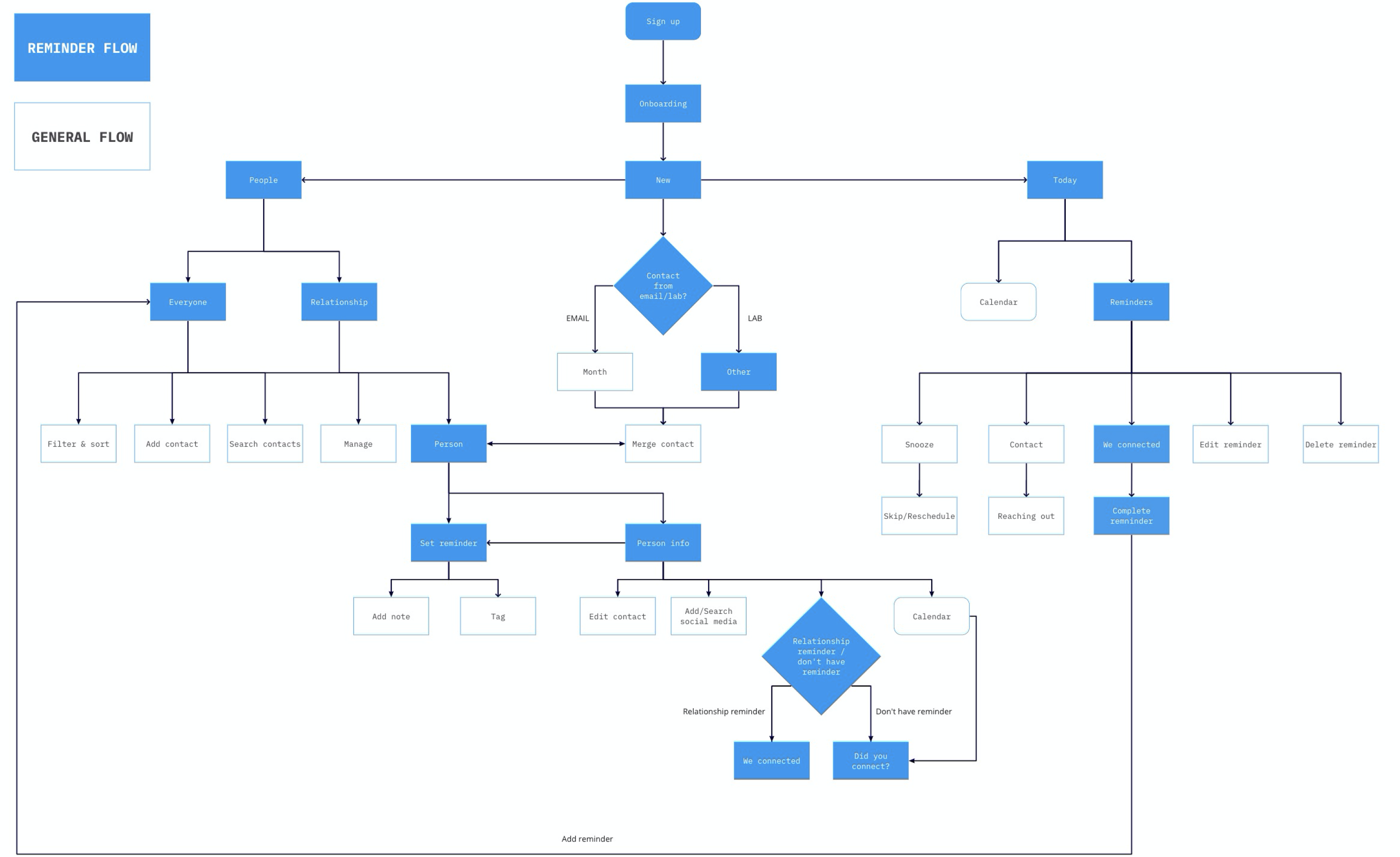 To conduct an in-depth usability test with new users, we outlined detailed documentation where we determined our 5W’s.

This helped us create a prompt that focused on the problem we were trying to solve - Users are not following up with their reminders in the app. 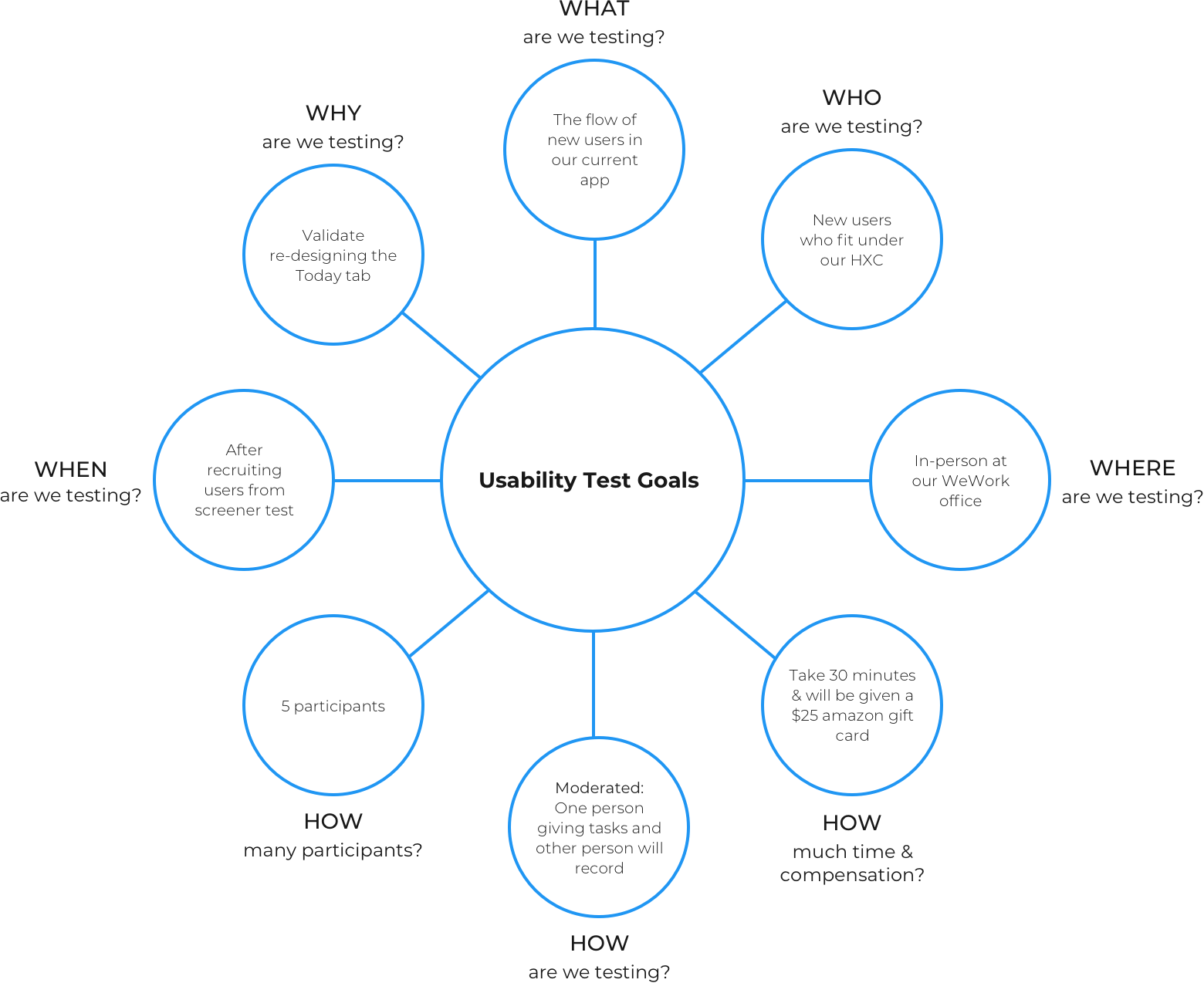 Once the prompt was approved by our Senior Product Designer, we recruited
5 new users from our WeWork office to conduct the usability test.

From the responses we got from the users, we realized that there was a bigger problem at stake.

There was a big learning curve to the app and users did not understand how to use it.

This is when we had to make a pivot to the project and focus on creating a solution that would solve this problem. 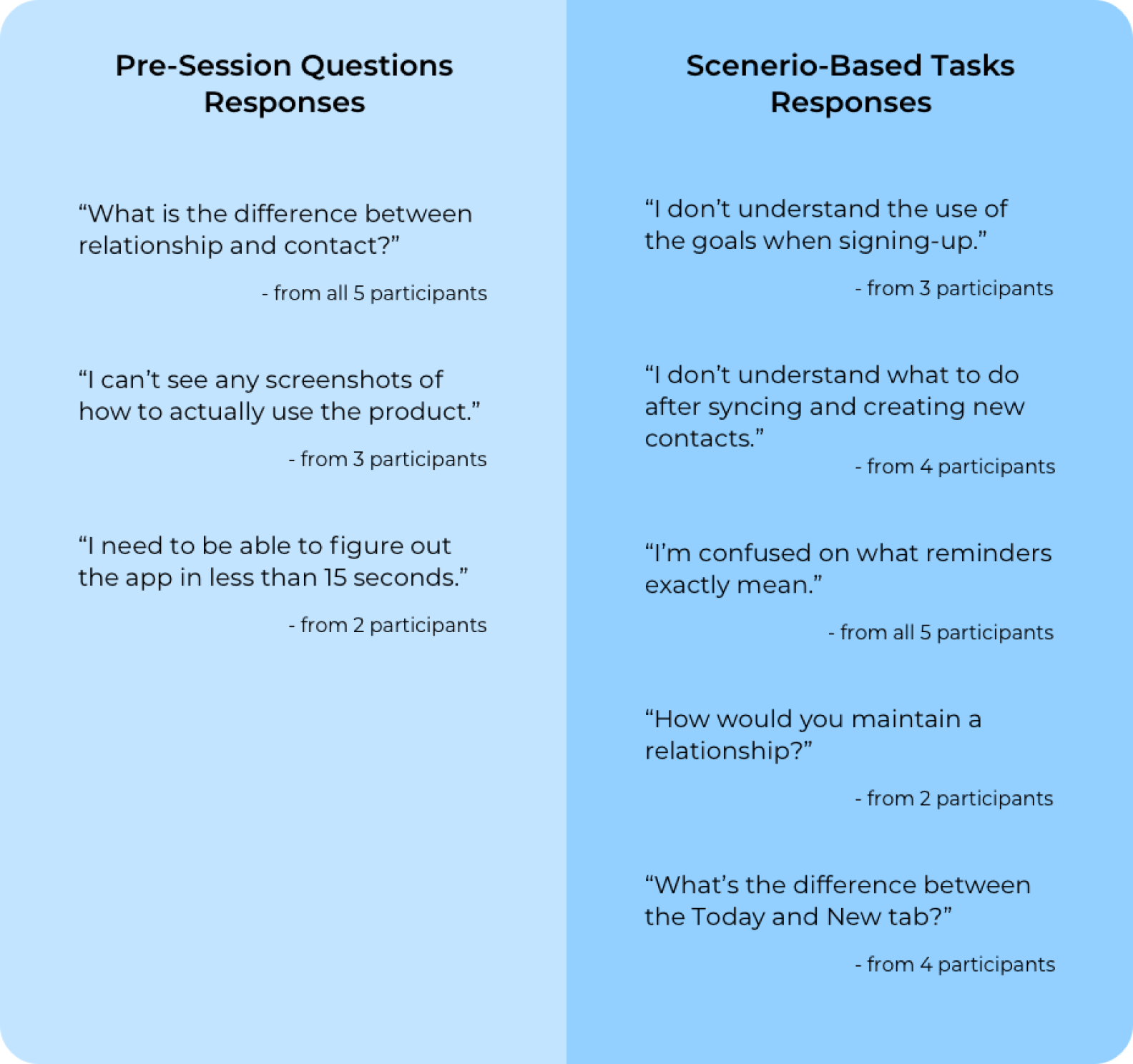 Since we needed to get out a solution to our users as soon as possible, we decided to create an MVP.

We knew that we needed to create a design that would either guide or give tips to new users. To avoid a long development time, we came up with a solution called the “Clippy”.

If this sounds familiar to you, it’s because you probably have seen it. This office assistant was an intelligent user interface for Microsoft Office that assisted users by way of an interactive animated character. We took inspiration from this and created our own.

The dismissible helper card would be triggered depending on specific actions the user took in the app. This would constantly prompt the user to take their next action and hopefully lead them to create habits within the app.

At the same time, we were working on our Onboarding North Star Vision so we knew that this problem would be revisited through that project and would ultimately fix the routing problem.

Since the helper dismissible card will be triggered depending on specific actions the user takes within the app, here are two examples how it can be shown.

After a user sets a reminder, Clippy is triggered to give tips on how to follow-up with the contact.

SET A REMINDER, NOTES, AND TAGS

As a new user enters the app and syncs their contacts, Clippy is triggered.

After it was implemented, there was a huge improvement in customer engagement in the app. 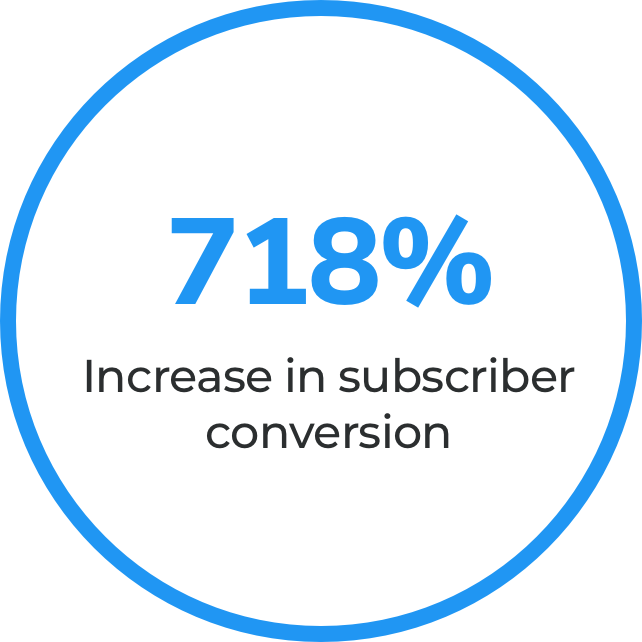 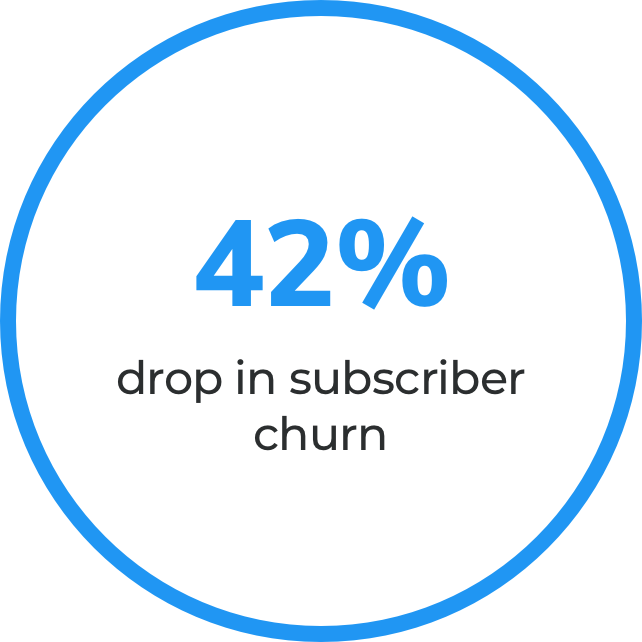 Depending on the problem you are trying to solve, the scope of the project can change anytime during the project. We should always remember that there are more factors involved other than the user’s needs.

Being able to work with other people from different teams can bring in new perspectives and ideas. Not only can it improve your work but gives people a sense of motivation and drive when working towards the same goal.

One of the most important roles as a designer is how you communicate with other people, whether that is with team members or stakeholders. The better you can articulate your design decisions to others, the better the design will come out.